Usually observed, market tops start forming in September, but this year is a bit different with an obviously possible top starting to form in July. The past month, and particularly past week, had been volatile with little direction, until the last few days of July, into the first few days of August, where a significant decision appears to have been made.

The monthly S&P500 ES futures chart (top left panel) had July clocking a hammer candlestick, suggestive of a peak point. The last week of July into August (top right panel) did not help either, with a long bearish candle that eclipsed the last 5 weeks – rather obviously bearish into August. The MACD had just crossed down too! The daily chart shows the massive breakdown over the last three days, which set the the interim start of a trend change, with gusto. The daily chart shows a significant breakdown of the 55EMA, closing a gap support area with a piercing bearish candlestick on Thursday and rolling through on Friday. Watch if Monday closes down, and if so, we get a DFDM (aka Down Friday Down Monday) which increases the probability to having two following down weeks. 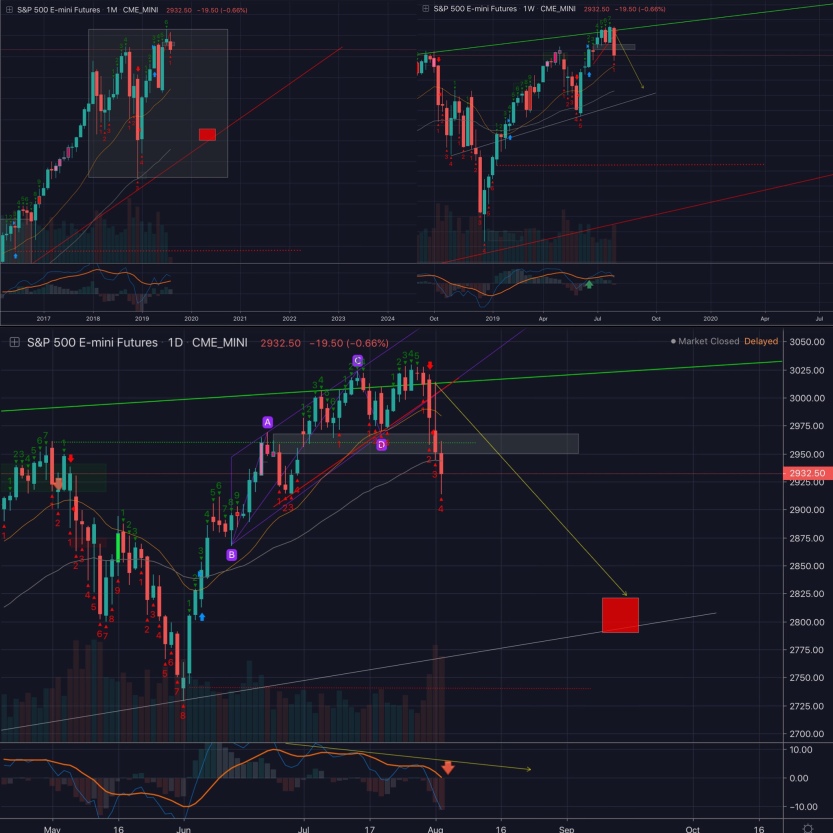 The JNK monthly chart presents an interesting outlook notably. It had a higher low over the years, and is in the midst of an active Sell Setup, just failing the 55EMA, but not fairing too badly either. It is interesting that there was a surge in June, concomitant with a significant volume surge, indicating that there is a strong support level there. Although it is a RISK OFF indication, it also subtly suggests that there is a hidden bull (RISK ON) behind this market fallout. Furthermore, the MACD is about to crossover into bullish territory, so the largest stronger trend appears to be up. Meanwhile, the JNK weekly chart hit the upside target, and formed a lower high, is heading down with a cross down MACD.

The Value Line monthly chart is clearly bearish in the chart term, and the Value Line weekly corroborates the bearishness, with lower high, 55EMA failure, and MACD down, soon to crossover into the bear territory. 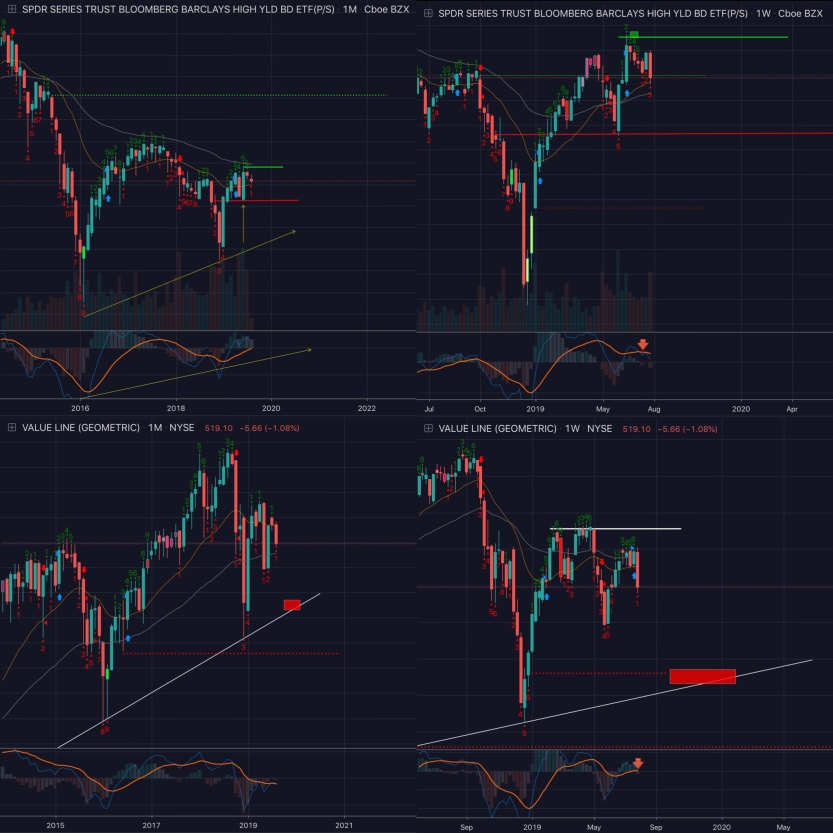 The Nasdaq monthly chart has a hammer candlestick similar to the S&P500, and the Nasdaq weekly broke below a support decisively for further downside to target. 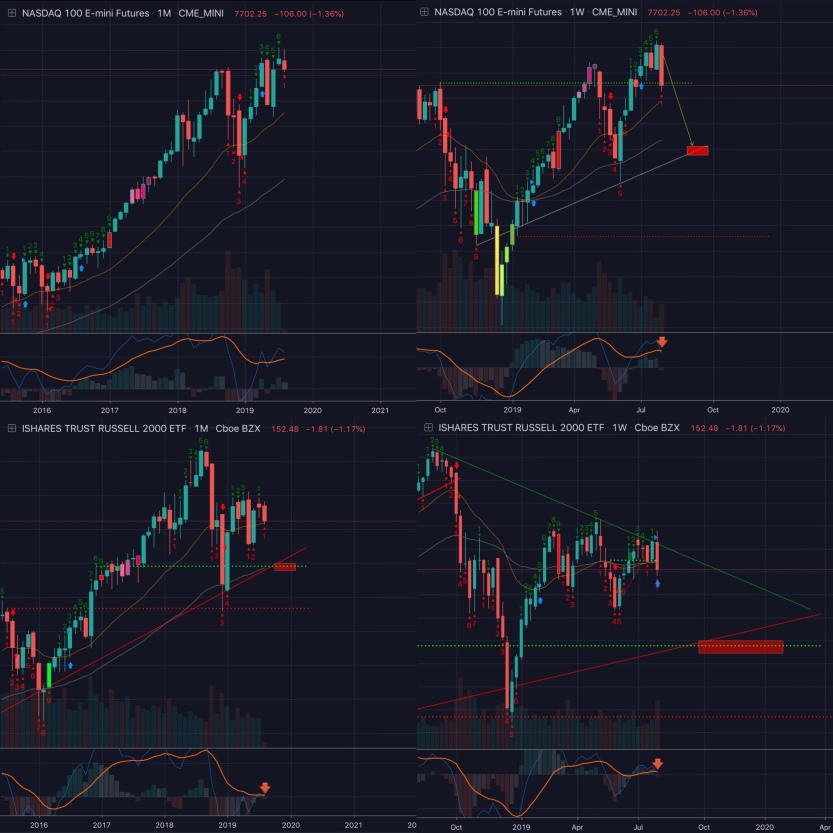 With all the bearish charts, the TLT monthly chart just perfected a Sell Setup, but also appears to continue with momentum to the channel resistance upside target. The TLT weekly chart demonstrates the additional momentum clearly with a new Setup initiated, supported by MACD cross up, and a parabolic run. 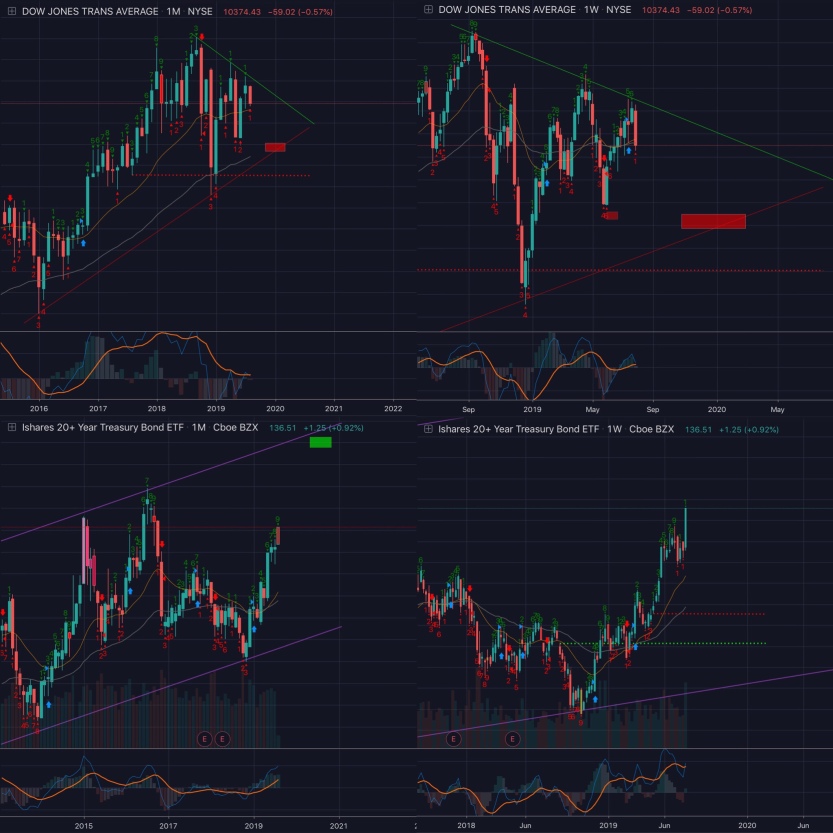 The USD monthly chart suggests that the USD appears to have strength, but remains to show if the bullishness would continue. The crack in the story likes with the USD weekly chart with a hammer candlestick for the week, suggesting that the USD may have also peaked out, post FOMC rate cut. There appears to be some conflicting indications, and the baseline is a bullish USD, until otherwise clearly indicated.

An important note is yet again to be highlighted, that with a strong(er) USD, there should be strength with the USDCHF (USD/Swiss Franc). However, the USDCHF monthly chart remains trapped in a range, although the MACD is deteriorating for a bearish outcome. The USDCHF weekly chart just failed the 55EMA and should be having more downside to target. 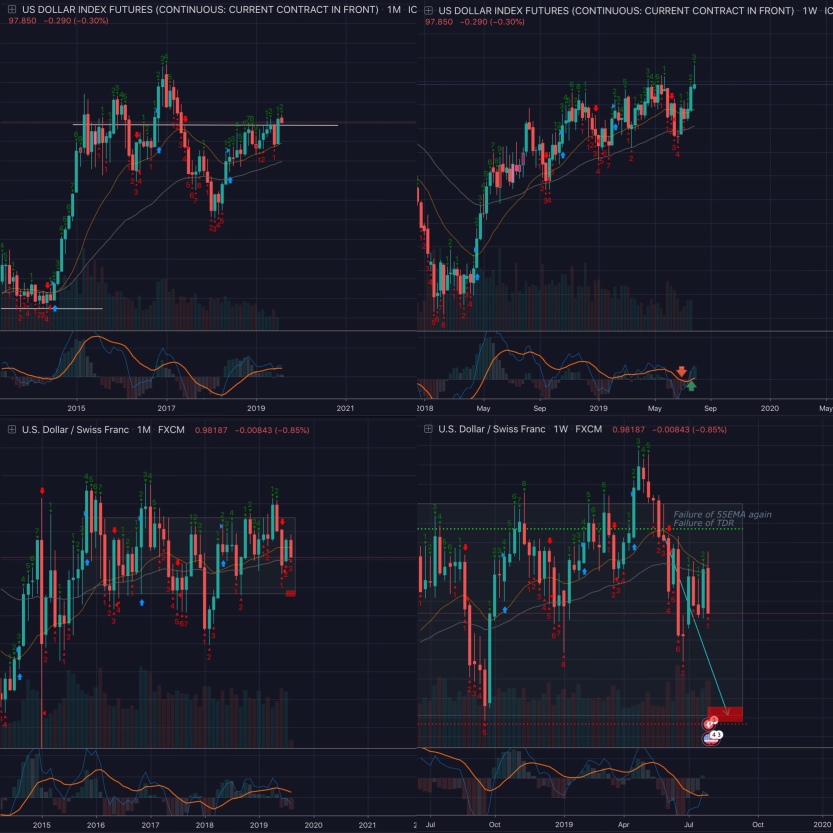 With the current weakness in the markets, and economic expectations receding, together with a rising USD, it is not unexpected for Crude Oil to be bearish. The monthly Crude futures chart is bearish with a failure and a second failed test of the 55EMA. However, it is noted that there is a series of higher lows and also other indicators suggesting that there is a hidden bull. The weekly crude futures similarly failed the 55EMA for th second time, however, this is expected to be temporary. The same other indicators suggest that Crude should bounce off 52, and then look to turn bullish towards the end of the year. It is very uncanny that the Monthly and Weekly chart for Crude actually look and indicators formed so similar and it is left to wonder what kind of anomaly this might be. On the Crude daily chart (not shown), the more specific level is 51.70, a 38.2% Fibonacci level, also support from the last low. In all honesty, this imminent bullish bounce is not good for the global geopolitical and economic landscape, and would be another discussion for another day.

Collectively, it would not be surprising too, if the winner under these conditions turn out to be Gold, the commodity of time eternal. The monthly Gold futures are favorable for a new Gold uptrend, just launched out of a multi-year triangle on a new Setup, which potentially could bring it to 1780 to challenge the monthly TD Resistance. The weekly Gold chart also shows a strong confluent breakout uptrend that originated from a Cup and Handle pattern, within a triangle. The momentum is confirmed with a pennant pause followed by a continuation breakout last week. The millennials would call this Bullish AF. 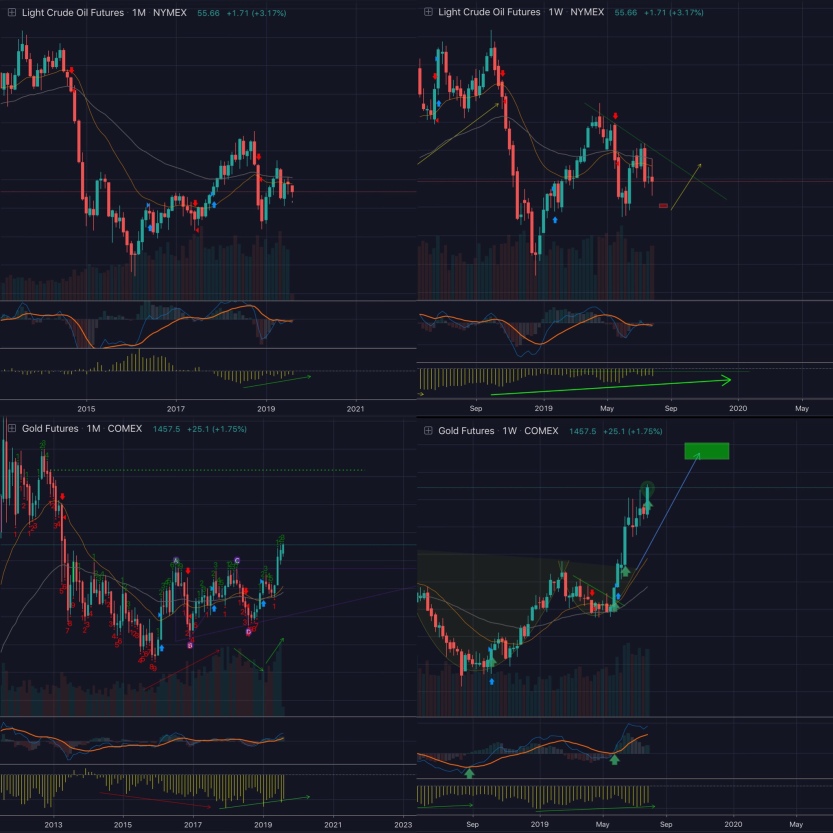 Thank you for taking the time to read and learn. If you came this far, it means that you are rally keen to learn and understand. So let me leave you with three good things to follow on, on your own due diligence, of course:

1. The other indicator I mentioned above, is actually the COT data of Net Positions of the largest 8 traders. This is significant as it forms a clue as to the biggest part of the market and their positioning;

2. GDX – the monthly chart of the GDX is a real winner, if anyone realized. The monthly breakout sets up a potential target of 30% upside from the current closing price. And it is only beginning a mega trend.

3. Silver – besides Gold, Silver is the other metal that would be the cherry on top of the cake. Basing out over the last two years, and with so many favorable technicals,it just broke out this month and is projected with a potential 38% upside target from current closing. 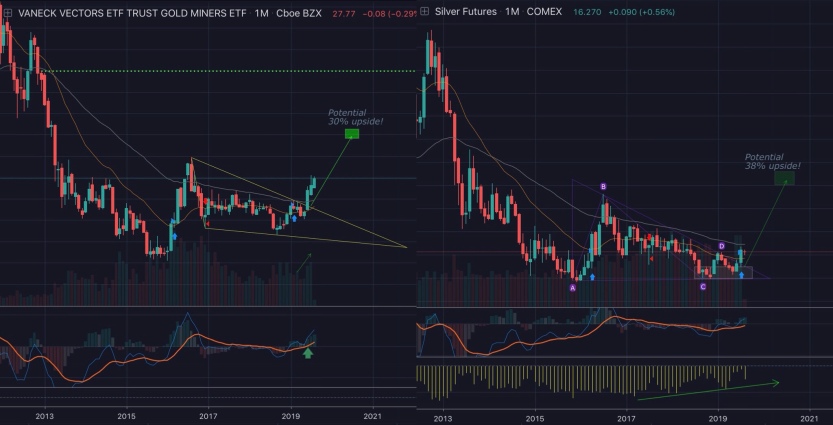 I really hope that you enjoyed this monthly analyses, and presentation. I am excited as the world just changed in a Thanos finger snapping like moment, affectionately coined by me , the Trump Tweet. Stay tuned for my Personal Finance management idea coming soon as I underscore the effects of these changes and how it would affect us for the next 10 years and beyond…

Meanwhile, stay safe and have a great week ahead!

Do those around you a favor, if you found this blog/post useful,

Join in the Telegram group https://t.me/DrWealthHacker

FUTURES AND OPTIONS TRADING CARRIES SIGNIFICANT RISK AND YOU CAN LOSE SOME, ALL OR EVEN MORE THAN YOUR INVESTMENT.

STOCK TRADING INVOLVES HIGH RISKS AND YOU CAN LOSE A SIGNIFICANT AMOUNT OF MONEY.

THE INFORMATION CONTAINED HERE IS PURELY FOR INFORMATION AND WAS GATHERED FROM SOURCES DEEMED RELIABLE, HOWEVER, NO CLAIM IS MADE AS TO ITS ACCURACY OR CONTENT. THIS DOES NOT CONTAIN SPECIFIC RECOMMENDATIONS TO BUY OR SELL AT PARTICULAR PRICES OR TIMES, NOR SHOULD ANY OF THE EXAMPLES PRESENTED BE DEEMED AS SUCH. THERE IS A RISK OF LOSS IN TRADING FUTURES AND FUTURES OPTIONS AND STOCKS AND STOCKS OPTIONS AND YOU SHOULD CAREFULLY CONSIDER YOUR FINANCIAL POSITION BEFORE MAKING ANY TRADES. THE REFERENCE TO STATISTICAL PROBABILITIES DOES NOT PERTAIN TO PROFITABILITY, BUT RATHER TO THE DIRECTION OF THE MARKET. THE SIZE AND THE DURATION OF THE MARKETS MOVE, AS WELL AS ENTRY AND EXIT PRICES ULTIMATELY DETERMINES SUCCESS OR FAILURE IN A TRADE AND IS IN NO WAY REPRESENTED IN THESE STATISTICS. THIS IS NOT, NOR IS IT INTENDED TO BE, A COMPLETE STUDY OF CHART PATTERNS OR TECHNICAL ANALYSIS AND SHOULD NOT BE DEEMED AS SUCH.

CHARTS ARE FROM TRADINGVIEW